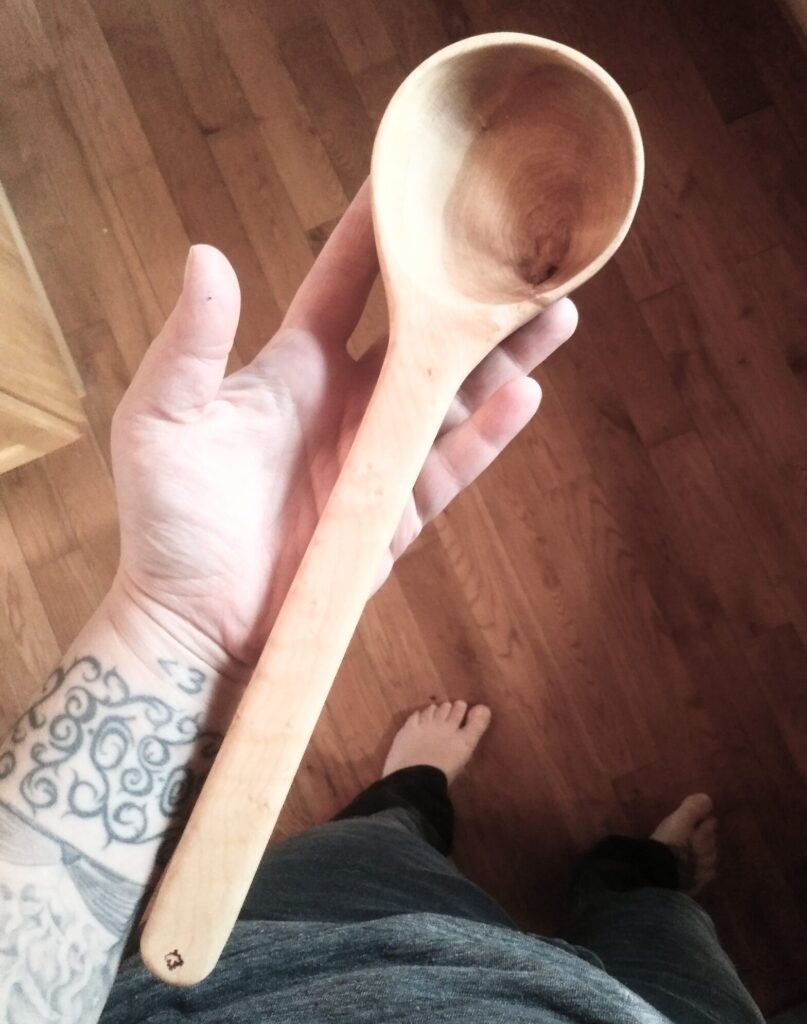 In my adult years, I have been a serious grinch about Christmas. To be honest, I don’t really enjoy the holiday. It’s a conflicting time of over consumption, being exhausted, and constantly being asked to break personal boundaries in the name of family time together. I do not enjoy any of these things. The bits of the season that I do enjoy are spending time with loved ones, celebrating the turn of the season on the solstice and reconnecting with the natural cycles of the world, and, finally, the practice of giving gifts.

Leading up to Christmas this year, I found that I was feeling a little less grinchy. It might have been because the pandemic has limited family gatherings and expectations for participation were lessened. But I think it’s actually because I have started weaving again and resolved to hand-make as many gifts as possible. I made rugs and pottery for most family members, and we even limited the number of gifts for the kids, which they didn’t notice at all in hindsight.

Gift giving during the holidays is totally overwhelming because of expectations and capitalism, but the act of giving gifts is actually one very close to my heart. I love the idea of gift economies and even try to do business this way when I can afford it.

A gift economy is an alternative to the exchange of currency where people share what they have with others to strengthen the community as a whole. It’s not the same as a barter exchange or trade where the value of the gift is calculated, but gifts are given freely to those in need when people can afford to give. It’s based around redistribution of goods and the idea of mutuality.

Trying to work within a gift economy while still contained within a capitalist system is really hard. One, everyone wants to know the value of your gift so they can give something equal in exchange (this is barter, not gift) and two, if others don’t reciprocate, your needs generally aren’t met. And of course, three, if you still need to pay your rent or buy groceries, it’s unlikely that you’ll receive gifts that can support you in this way, although gifts of money can still totally be given in a gift economy model. People get really bogged down with the value of gifts though, and then they’re essentially just paying you instead of exchanging gifts.

There are many indigenous communities that operated within the gift economy. A great example is the potlatch of the Native American tribes of the Pacific Northwest. Families would host a feast in which they would give away as much as possible to other members of the tribe or visiting tribes. Power was determined by how much could be given rather than what was received.

It’s almost impossible to use a gift economy within a capitalist system. They are inherently at odds. One is about giving and the other is about hoarding. But when it comes of gift giving seasons like Christmas, I think there is a lot that we can learn from the ideas presented in a gift economy:

Gift giving is about redistributing wealth, about giving to those in need, and sharing the excess of what we have (rather than going broke trying to give expensive things to people that really don’t need them).

Gift giving is about sharing what we already have, our skills, our time, our labour. Our gifts should connect us.

Gifts do not need to perpetuate the needless extraction of materials from the Earth. We do not need more useless stuff to eventually get thrown into landfills.

Gifts can be immaterial. They can be stories, experiences, songs, seeds, recipes, traditions, or expressions of love.

Gifts should not have value. Gifts do not need to be weighed or measured or compared.

If you are finding yourself exhausted by the Christmas season or maybe are struggling to find meaning in an overly commercialized traditional holiday, I urge you to reconsider your relationship with the season as one that celebrates the giving of gifts, and then reconsider what it means to give and receive gifts with others. I’ve found that for me, it’s ignited a flame long since extinguished and turned me into just a little less of a grinch.